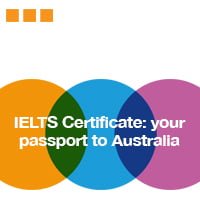 IELTS Certificate: your passport to Australia

IELTS stands for the International English Language Testing System and it is used to assess the language skills of those who plan to study or work in an English speaking environment. Over 2 million people annually take the IELTS examination because it opens doors for further study, employment and migration to Australia and other English speaking nations.The IELTS exam was created by world leading experts in language assessment and it is backed up by extensive research and test development. As the name suggests the IELTS is internationally focused with its content accepting all standard varieties of English and using a range of accents in the listening component. Furthermore, IELTS has over 800 test centres in more than 130 countries and 48 of them are in fact to be found in Australia. The test is also very accessible and is generally held up to four times per month in test centres. Even if you don’t want to continue your studies, work or migrate to Australia you may wish to do so in another English Speaking country down the track - the results of the test are valid for 2 years.The IELTS is designed to test English at all levels and thus the test is not a pass/fail with scores allocated within bands from 1 to 9. The test is made up of four components: listening, reading, writing and speaking. Despite the IELTS being so extensive results are still prompt and are issued just 2 weeks after the test is taken allowing participants to use the accreditation quickly. The IELTS examination is recognised by universities, employers, professional bodies and immigration authorities in many countries. Most universities and private colleges require a certain score (usually between 5 and 7) in order to allow entry of students from non English speaking backgrounds and the test is compulsory for migration purposes for those hoping to stay long term.  The test is offered in both academic and general formats, the academic being  for those who want to to gain admittance to higher education programs whereas the general is for those planning do work experience and/or training programs as well as for immigration.So what are you waiting for!? Come in to speak with us about schools offering IELTS preparation courses now!
Contact Us now!