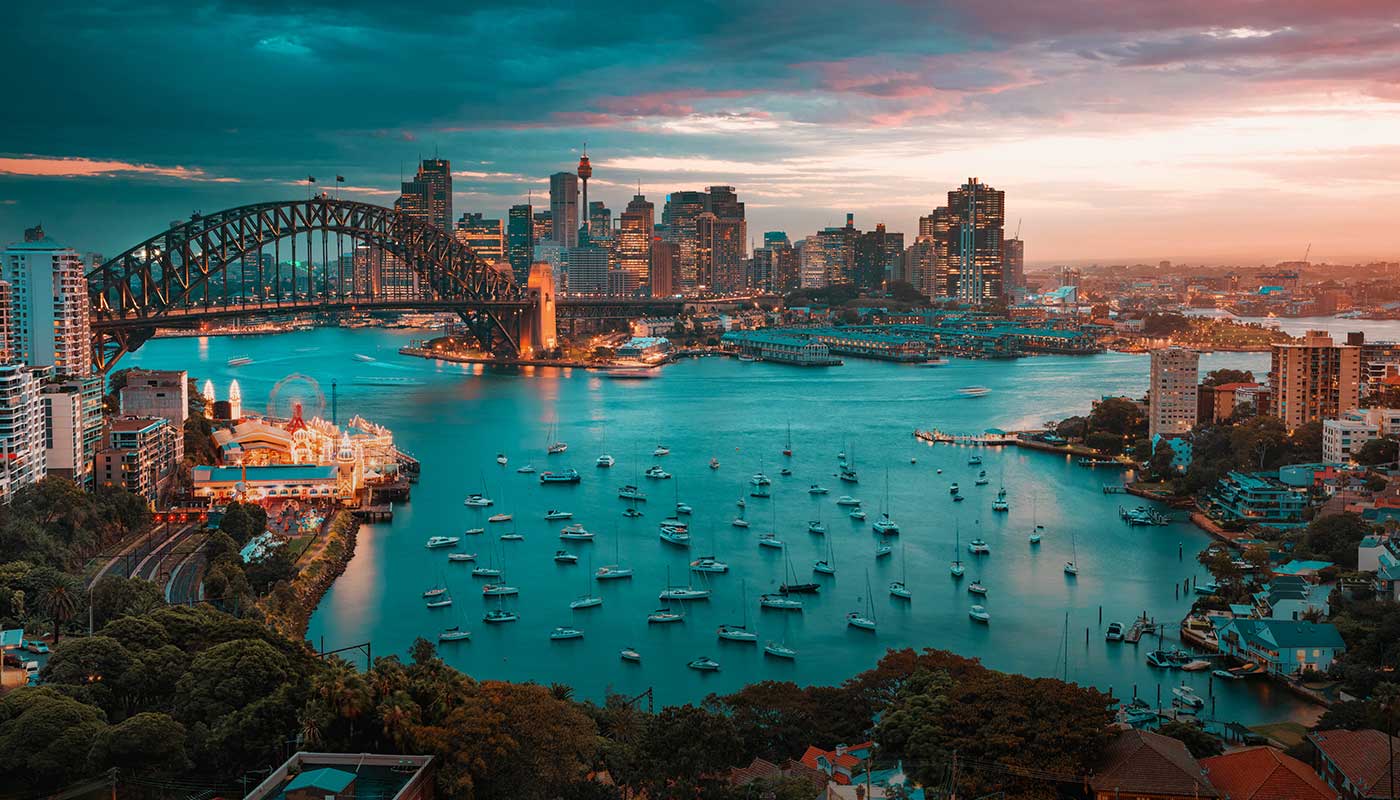 Study and live in the heart of Australia!

The experience of a lifetime is waiting for you right here! Sydney stretches all the way from its incredible beaches and coastal walks through the bustling CBD (Central Business District), and then all the way out to the bush land and impressive national parks.

There’s never a shortage of things to do. Sydney has a buzzing art and culture scene, some of the best restaurants, bars and cafes, amazing weather and world-renowned landmarks like the famous Sydney Opera House and Harbour Bridge.

Immerse yourself in this amazing culture and become a Sydneysider. The vibe here is one of a kind!

The climate is amazing all year round

Nature is a big part of the city

The city is thriving and there is always something to do

You get to live and breathe multiculturalism

There are plenty of job opportunities

Check out our Sydney office!

Our Go Study Sydney office is here to help you get the best out of your experience! Come find our Job Support & amazing Events, and renew your visa at the best price with us! What are you waiting for? Contact us!

Studying in Sydney is a chance for you to open up to the world, get inspired, and grow as an individual: personally, and culturally.

There are very few cities around the world like Sydney. Here, you can take an English, or professional, course in your chosen field of work. We have always known that Sydney is an exceptional place for international students, so we have partnered with some of the best schools in the city.

About 30% of Sydney’s population were born abroad. That means you’ll have plenty of opportunity to meet people and make friends from all over the world; people experiencing similar things to yourself. Regardless of whether you choose to stay short or long term, this is an experience you’ll remember for the rest of your life!

Do you want to improve your English?

Sydney is the perfect place and environment to study English. There is a wide range of schools, offering courses for all levels and learning needs. The demand for language courses is extremely high; tens of thousands of people come here every year in search of new opportunities and to better their language skills. There is huge variety in the courses to choose from, ranging from the most basic, inexpensive courses to some of the most prestigious schools in the world. Many courses will also organise optional recreational activities outside class hours, giving you the chance to be a social butterfly, practice your language skills, have fun and easily make new friends.

What if your English is already good?

If you don’t need to practice your English, there are tons of other options in the form of vocational courses (VET).

Vocational courses allow you to train in a specific field of work and get an Australian qualification. If you want to study in Sydney, this might be for you. After all, there’s something for everyone!

Many universities in Sydney have very good rankings amongst the world’s educational institutions. The University of Sydney, for example, is one of the most renowned universities in the country and ranks 61st globally (25th among the faculties of sociology). If you already have qualifications but want to take your education that extra step, Sydney is the perfect place – the opportunities are infinite!

Working in Sydney is a beautiful and exciting experience. The city offers many opportunities in tourism, hospitality and catering, and these industries employ over two million people. As one of Australia’s most popular cities, the competition among job seekers can be high.

Knowledge of the English language is essential for anyone looking for work. Job seekers with strong English skills and experience in their desired field may have an easier time finding a job in Sydney. A casual job, combined with attending an English course, is recommended for those who do not yet speak English fluently. These skills will increase your employment opportunities.

It can be difficult to initially find work, even if you are a graduate and have experience. Job markets and requirements vary from country to country, so we recommend you learn more about the system in Australia. Although this might sound daunting, we advise you not to give up! Once you arrive in the city, start looking for a job that will provide you with an income as soon as possible. You will then be able to focus more time on moving into an industry that interests you.

It is important to maintain a positive attitude even if things are not going exactly as you planned. In Australia, motivation and willingness are taken into account.

The cost of living in Sydney can come as a bit of a shock when you first arrive but there’s no need to worry. Salaries and minimum wages reflect this and are higher too; you’ll feel much better after receiving your first pay check.

Residents of Sydney enjoy a high quality of life due to the wide job availabilities and study opportunities.  The laid back, relaxed atmosphere allows you to make the most of your leisure time. Sydneysiders work hard to play hard.

Why choose Sydney instead of one of Australia’s other cities?

Sydney is considered to be one of the most beautiful, safest and liveable cities in the world. No matter the time of day or night, Sydney’s low crime rate allows you to walk around the streets and take public transport.

Sydney is known for its beautiful beaches and amazing climate. It’s sunny and warm during the spring and summer, and cool and mild in the autumn and winter. With such a temperate climate, who wouldn’t want to live here?

From architecture to nature, there’s always something to be amazed by in Sydney or something new to discover. Port Jackson is the largest natural port in the world; the Opera House and Harbour Bridge are symbols of freedom and beauty; and let’s not forget the beautiful shopping mall inside the Queen Victoria Building. This building originally completed in 1898 and has to be one of Australia’s finest, most elaborate restorations.

As for nature, Sydney has over 120 beaches that offer meeting places for tourists and locals alike. The all-famous Bondi Beach, which is frequented by surfers all year round, is a hot spot for Sydneysider’s weekend beach days and barbecues.

Additionally, there are many perfectly maintained and well-integrated parks; both in the city centre and in the suburbs. You can feel like your miles away from the city even if you’re in downtown Sydney. In the south lies the world’s second oldest national park, the Royal National Park. The National Park is home to the Wedding Cake; a fragile all-white rock formation that resembles a wedding cake. Then to the west you will find the legendary Blue Mountains, encompassing forests, Katoomba bushwalks, waterfalls, quaint little villages and more. This is a national park not to be missed, housing the well-known Three Sisters sandstone rock formation.

Trekking and hiking are typical weekend activities for Sydney’s residents. In particular, the walk from Spit Bridge to Manly, which is one of the most popular and is known for its many vantage points.

As well as the unmissable views around Sydney, Australian wildlife is not hard to find. If you go inside the Royal Botanic Gardens, you have the chance feed cockatoos and parrots. Go there at dusk and you can admire them flocking on their move to Centennial Park. In addition to other fuzzy friends, like possums who you will see moseying around parks and gardens, you can also see whales off the east coast of Sydney – especially in the winter as they migrate south. You can download an app, which tells you when the last whale sighting took place. Every now and then you might even see them inside the port.

Sydney is a cosmopolitan city. The culture here is extremely diverse and provides much variety from the people you encounter and the food you eat to the art and landmarks around the city.

There is a huge array of live music, art galleries and theatres; all a big part of day-to-day Sydney life.

Throughout the week, venues around the city showcase large international acts and blockbuster musicals. You will get to see up and coming artists playing in the smaller venues like the historical Enmore Theatre.

If art is your thing, you can visit grand events such as the Biennale which spans across many art galleries in the city. Vivid Light Festival is one Sydney event you don’t want to miss. The light festival takes over Sydney throughout May and June. Entertainment is always at the tip of your fingers in this vibrant, colourful metropolis.

Multiculturalism is a huge part of the Sydney lifestyle, making it the perfect place for international students to study and work.

This city is very generous and can offer you whichever lifestyle you desire! Your lifestyle is your choice, whether you want the fast-paced city life or the chilled-out beach-life vibes.

That being said, for many residents in Sydney, sports and leisure are a huge part of their day-to-day lives – people here are generally very active. If this sounds like you, there’s an abundance of sporting activities. From playing sports like cricket or rugby with the locals; learning to surf at Sydney’s iconic beaches; or embarking on a bush walk adventure, Sydney will always keep you moving!

If you’re not into sports, shopping and fashion might be your thing. Sydney is home to some of the world’s best international, designer brands, but also houses a market for smaller brands that create unique and one-of-a-kind products.

Often on weekends, throughout the suburbs, you can visit large markets full of homemade and thrift items, live music and home-made snacks. The beautiful Queen Victoria Building (QVB) alone has over 180 stores, where there is something for everyone.

Moving to a new city can be very scary and daunting, especially if you haven’t lived away from home before. But that’s the reason we exist; to make sure you don’t end up feeling that way!

We are here to be your friend and expert mentor throughout your time in Australia. We can solve your problems and connect you to amazing opportunities that will ensure your experience in Australia is nothing less than life changing. Our counsellors speak multiple languages and our door is always open should you need support!

Francesco: Australian Universities and my Future.