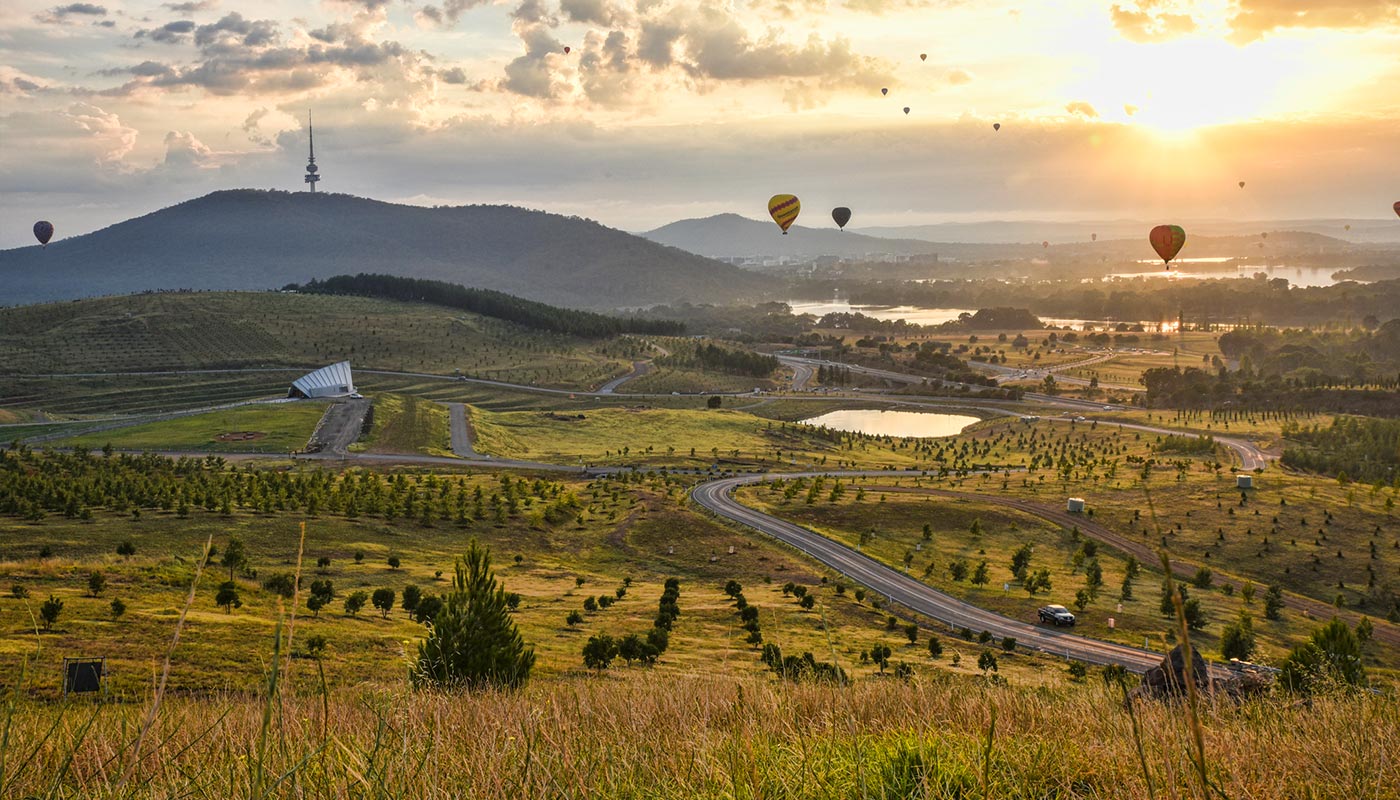 The capital of Australia

It is often thought that it is Sydney, but Canberra is the real capital of Australia! It is a city little known compared to the other Australian metropolises. It has a rather large area of 814.2 square km, made up of numerous green spaces that make it an airy and spacious city.

The population is about 370,000 inhabitants, or one tenth of that of Sydney. This makes it a rather quiet city where you can enjoy your surroundings peacefully. Unlike the majority of Australian cities, Canberra is inland. This results in a climate characterised by hot summers and cold winters. However, the sea and the mountains are just a two-hour drive from the capital.

The Brindabella mountain range in fact laps the capital and several Australian reserves that are home to kangaroos and other typical Australian animals that dot the surroundings of the city. For quite some time, Canberra has remained outside the usual tourist routes, but lately it has begun to attract more and more visitors interested in government buildings, museums and the wide variety of wineries, trendy restaurants and craft breweries.

The best season to visit Canberra is probably February, but the city offers numerous events and events throughout the year. For locals living in Canberra, it is a privilege, and they consider the capital as one of the best cities in the world to reside in. The city was born following a long debate between Sydney and Melbourne concerning the granting of capital status. Today, it is actually considered by many to be one of the best designed and organized cities in the world.

THE HISTORY OF CANBERRA

At the beginning of the 20th century, the region where Canberra is located was a rural area that, for thousands of years, had been inhabited by the Ngunnawal and Walgalu Aborigines. When in 1908 it was chosen as the capital of Australia, only a few thousand farmers and breeders lived here. According to tradition, Canberra was chosen as the capital of Australia to put an end to a rivalry that exploded violently between Sydney and Melbourne with regard to obtaining the status of the capital city.

The government of that time decided to decree the construction of a new centre that would have served as the capital of Australia. In this way, similarly to Ottawa, Brasilia and Washington, Canberra was specifically designed to house the Australian Parliament and other political and economic institutions of the country.

In the construction of this agglomeration the plan was inspired by the philosophy of the “garden city” and for this Canberra is a city characterized by large spaces of spontaneous vegetation, divided in two by Lake Burley Griffin, named after the American architect Walter Burley Griffin who followed the design of the city. The architect made sure that the landmark of the city was the Parliament House and that it was always visible from every point.

The very low rate of unemployment makes it a city with a vocation for work and, both for this and for its harsh winter climate, it has never entered the hearts of Australians too much. In fact, in addition to the representative palaces and its austere and serious appearance, Canberra is also a lively and interesting city.

The university centre attracts students from all over Australia and also from abroad, and the young people are not lacking in animating the nightlife, especially during the weekend. The cultural offer is also tempting with some particularly attractive museums including the National Gallery and various art exhibitions and galleries. A curiosity: the name Canberra (which moreover is pronounced in two syllables “canbra”) would derive according to some from the English name of the Canberry locality while, according to others, it would originate from the word aborigine Kambera, which means “meeting place”.

WHAT IS THERE TO SEE IN CANBERRA?

Canberra is a city that is easy to get around with regular and very wide roads. You could rent a car to get around or rely on one of the sightseeing buses that organize guided tours. Among the things you can’t miss visiting:

Located on Capital Hill. The modern architecture of this building will make your head spin. It is the seat of government and symbolizes the importance of Canberra in making important political and economic decisions in the country. Visitors can see how the democratic debate comes to life during Question Time. The roof of the building is covered with a grass mantle and gives the opportunity to admire a breathtaking view of the city.

For lovers of greenery and nature, don’t miss a visit to these botanical gardens. This superb site of about 90 hectares hosts the richest collection of flora in Australia. Remaining on the subject of nature, you can visit the National Zoo & Aquarium, where you can admire animal species from Australia and the rest of the world.

A museum that traces the history of Australia, with an exhibition of famous Australian and prominent portraits that marked the different eras of the country. The building occupies a space of 14,000 square meters and contains more than 500 portraits.

It is the national centre of science and technology that offers exhibitions related to new technologies and scientific discoveries. It is a particular mix of attractions, exhibitions and new discoveries. A fascinating place that is not to be missed!

Canberra is an ideal city for study and work experience. Living in Canberra allows you to have a relaxed lifestyle, which is less hectic and more on a human scale. The university is represented by the University of Canberra which was established in 1967 and is located in the Bruce district north of the capital. Every year, 2,500 international students choose it as a study destination. Studying in Canberra will allow you to choose between different schools and universities and benefit from the National Library of Australia.

Canberra is considered one of the best cities in the world to live in. Given the proximity to the mountains and because of its climate, Canberra is a city suitable for those who love hiking, cycling and trekking. Among the various nature reserves surrounding the city, we find the Tidbinbilla Nature Reserve, which offers several hiking trails. There are also several bike paths that will allow bicycle lovers to ride in peace. Wine lovers can also find some interesting locations in Canberra.