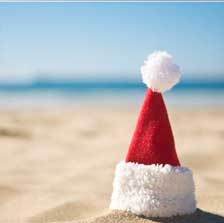 Lots of food, coats, cold weather and even snow are part of what most of us understand as Christmas, exactly the opposite to what an Australian Christmas looks like.

Due to its geographical location in the southern hemisphere, at this time of the year heat starts to come to Australia and therefore the cities become more lively. Some would say that Christmas without cold is just not Christmas, they may be partly right, but Christmas in shorts and thongs is not bad at all. Christmas Day itself is already different Down Under, despite Australians also spend most of the time with family and friends many people choose to hold a barbecue at the beach or a picnic in a park or prepare a meal of cold meat and seafood followed by Pavlova, a soft meringue cake topped with whipped cream and fresh fruit. More is coming just one day later on Boxing Day , the 26th of December. This festivity has its origins in the British Isles and other nations that belonged to the British Empire as it is the case of Australia. Originally this used to be the day for donations and gifts in boxes (hence the name "Boxing Day") to the poorest classes of society. Today is a public holiday when also big sporting events are organized such rugby or football matches. Finally, as a closing celebration, New Year's Eve. Australia focuses his attention on the Harbour Bridge in Sydney. Last year (2012-2013) at midnight just over 1 billion people could see again one of the most amazing fireworks shows in the world. More than 7 tons of fireworks were burned for a massive celebration which had a cost of $ 6.9 million according to the organizing team of the mega event. In cold or heat , in sandals or with a warm jumper the most important at this time of year is that everyone is surrounded by family and friends to spend a happy time together. In Australia you might not be with everyone you wish but it will definitely be a great opportunity to spend at least a different an original Christmas time. Merry Christmas!
Contact Us now!