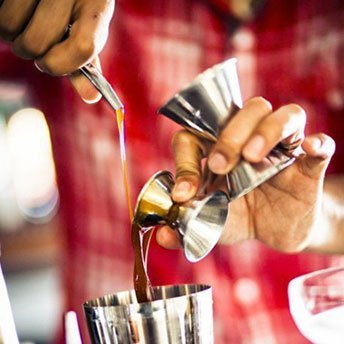 To work as a Bartender is the goal of many who set off for Brisbane. Here’s an account. I arrived in Brisbane at the height of the Australian summer season in a sweltering heat. I had no time to waste, even if my cheap matress wasn’t as comfortable as I had wished for, I started my job hunt on day 2 armed with a sheaf of resumes. Luckily I had received loads of good advice from people who had lived in Brisbane, including the team from Go Study and pointed straight to the busy districts: New farm, South Bank, Paddington, Riverside, etc. My travel mate and I circled the city in two days and asked for a job in every and each place we came across: restaurants, bar, hotel and stores. The result? On the second weekend since my arrival I had landed a job in Australia. The Exotic Accent My first job was as a Barista at The Peasant: a Spanish restaurant with only one Spanish on the team: me! I was asked to stress my accent to sound more “exotic”. I fast tracked in on the job training: though I was experienced, everything appeared to work differently, names and methods too. The key was to adapt. Amongst my initial working experiences, the one from which I gained more out of, especially in terms of patience and understanding was at Musik Cafe: a well known restaurant/bar with live music in the West End. It was a great place and I was treated exceptionally well. Unfortuantely it closed down to undergo refurbishment and I had to find a new job. This time however, having made some connections in town, it was easier and in short time I found a job at a Nando’s outlet in Paddington, just a step away from where I was living. I embraced the job and learned how to multi task efficiently between the kitchen, cash register, customer service and on the phone for take away orders. I progressed to a higher role in no time and maintained it until my departure from the country. I had adjusted to a blissful routine - I must admit. Conclusion is? He who has it rough wins or, in other words, never give up. It all depends on you and your ambitions. Saying this I don’t mean you have to sift out every inch of the city to find something worthy but with some effort and motivation, you will achieve results. I believe there are many opportunities in Australia, it is only a matter of personal ambition to exploit them.  Guaranteed, its not impossible! Happy Australia to all!
Contact Us now!